Wow! That's the longest title for a blog post, EVER!

It's my turn to share for the Craft Buds blog hop!

(details for the giveaways at the end of this post)

One of my favorite quilt blocks ever is a chubby dresden!  I made my first one as part of my first online quilting bee over 3 years ago! It won me over! The pieces were sent to me already cut and ready to go. That made it so much less intimidating!  At the time I didn't realize that it was from a book that I purchased shortly after that.  Material Obsession by Sarah Fielke and Kathy Doughty. I remember buying the book because it was when I first got back into sewing and I felt like buying a quilt book would authenticate me! heheh!  This was actually the first quilt book I ever purchased. I didn't know that the cover pattern would be one that I would use over and over.

Because I would still be working on making the whole quilt featured on the cover I chose to make some minis/tabletoppers with this pattern.  I  made two (almost) identical table toppers: I love polka dots, so I mimicked the small red dot on white for the background with these bright colors!  I love the way it sets it off.  And the pink on red sunspots from Amy Butler are always a great choice. And a quilt block for another bee: One of the secrets of these blocks is that I didn't applique the center circle down in a traditional manner.  I used a raw edge applique and just stitched it down!  The top one has a zig zag stitch, the second one is straight stitched with a pinked edge, and third is straight stitched on a straight cut.  I want to learn to really applique, so maybe I'll do that for my next one! I don't always enjoy the cutting portion of quilting so I cut a bunch of plates out at the same time. I just used a cereal box to make the template.  It worked pretty well, but since then I've bought an acrylic dresden ruler and hoping that will work a little easier.

I also have an idea to reduce it in size to make some smaller dresdens! Won't that be cute!?

I think Dresdens have so much potential! Planned, scrappy, whatever! This past year I had a few people make me some Christmas Dresdens for my month of the bee.  I think a whole quilt of Christmas wreath dresdens would be amazing!

Dresdens are one of those things that can look so intimidating but once you try them they can be addicting!  I love the modern look of this pattern too.  One of the best things about sewing is that you can take any pattern and make it your own!  I hope you try one of these, they make me happy just looking at them!

*****
This post is part of the Craft Book Month blog hop at Craft Buds.


Week Four
Link up your craft book project at Craft Buds from Sept 23-30 from your blog or Flickr account, and enter to win prizes. Winners will be announced on Monday, October, 1! 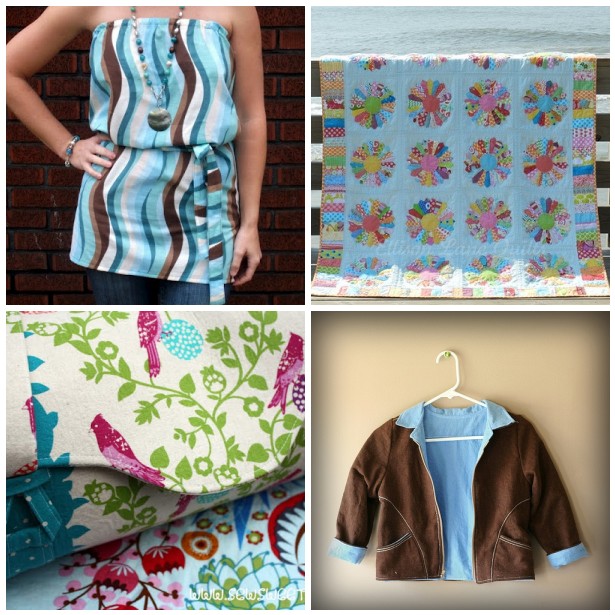 To participate in the month-long contest, just link up any project you've made from a pattern in a craft book. That easy! One entry per person, and all craft book projects must have been completed in 2012. Just create a new blog post or Flickr photo (dated September 1, 2012 or later) and link back to Craft Buds in your post or photo description. No time to create a project? This month, just follow Craft Buds and comment to win some new craft books and lots of giveaways!
Email ThisBlogThis!Share to TwitterShare to FacebookShare to Pinterest
Posted by Unknown at 4:39 PM

They all look great! I've only ever done 1 dresden block, and it was for a bee so I didn't keep it. I love the chubby ones.

So fun! I usually don't like busy prints, but the way you did these, it, it really works!
Check ou the Salt Lake Modern Quilt Guild slmqg.com
They had a Dresden Challenge blog hop and the ideas were amazing. The challenge is now closed and I entered and am awaiting the results! The challenge uses the Simplicity EZ Dresden ruler. It's so easy to use the ruler to cut all the pieces for the plates--they'll be even more addicting to you, and you can make them bigger or smaller, depending on the size strip you cut. Good luck!

Aww, those are kind of cute aren't they?

:) That's my dresden quilt in there! Yay!
Love your dresdens too Amy and that was the first quilting book I ever bought too!

I have been sewing and quilting for about 50 years, and have never attempted a Dresden Plate. You have me convinced I should give it a try. Thanks for the great pictures, and the book looks great.

It's amazing how many variations on one pattern there can be, I think I need to find myself a block or pattern I love and can use over and over again! Applique is something I haven't mastered yet either, I suppose that better go on my to do list :)

I love that block and will put this on my To Do list. What a wonderful book! Thanks for the inspiration.

You have inspired to try these blocks! I already have the book. You work is fun to look at. Happy quilting!

Love that block! I'm a follower of Craft Buds.=)

I don't think I'll ever be confident enough to tackle dresdens, but yours are so cute!

I see my block:-) I love making dresdens, and have made plcemats, and pillows out of them. A whole quilt a la Sarah is on my to make list.

I love the name of this book. Your blocks are wonderful. Thanks for sharing.

I do really love the look of dresdens, but I have not tackled them yet. I really enjoy the Christmas one, it's so fun!