Hey Everyone! Welcome to my week for this fun quilt along!

I'm not going to lie. I've never done paper piecing before. I was intimidated. And so I did what any good self-proclaimed procrastinator does when faced with something they're not sure about. I procrastinated! Hence, the pictures are dark because I worked on this last night. I'm glad I didn't mess up too bad or this post may not have gotten up today!

So that should be a good indicator that if I can do this under pressure and have it turn out okay, so can you!  And since we are so far along in the bee, you probably will see the same steps here that everyone else has done, just for this slightly different block.  I love the skinny points on this one.

*And a quick disclaimer - because I've never done this before I may do things in an unconventional way, but we can just add this to my {not a tutorial} list and remember that it's just the way I did it.  :) And I'm afraid maybe I didn't take the right pictures...but for me this is sort of one of those things that you just have to start doing and then it makes sense!

I started by printing off my pattern pieces for block 2 (all of the blocks in the quilt along can be found HERE) and cutting some rectangles of my two fabrics.  8 blue  and 9 white for the points.  When I printed out my pattern the 1 inch mark was slightly shy of an inch, but I couldn't figure out how to scale it, so I just left it alone. The finished block ends up being around 7 inches for my print out.

The rectangles I cut were about about 1/2" bigger on each side than the widest point of the point.  I figured a little more waste than I was used to was better than having to redo it because my pieces weren't big enough. 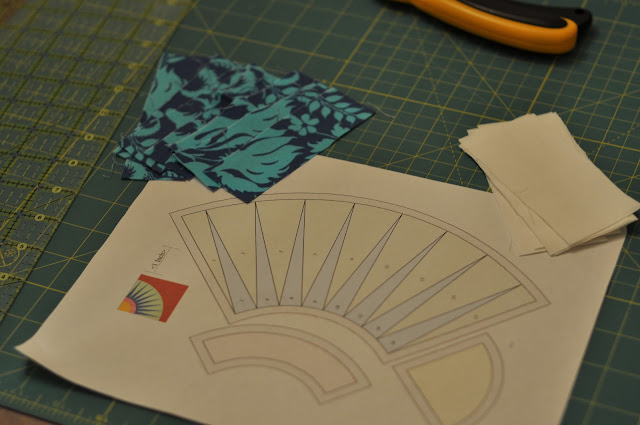 Since I was working at night I couldn't use my window to see my layers I decided my iPad would work.  You could also use a lit up computer monitor ~ just to make sure you were placing your fabrics in the right place.  To start out I placed one white and one blue piece, right sides together, underneath the pattern making sure there was enough seam allowance on the line right of the number 1.  In this picture I don't have it over far enough, but the fabrics are at a good angle.

I liked to open the fabrics before I sewed the together to make sure I had them in the right order and in the right position. 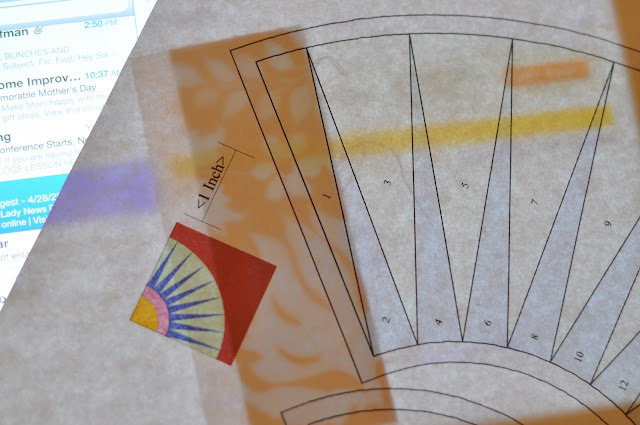 Here the fabrics have plenty of left over for a seam allowance. So I moved it over farther to the right and made the first seam along the line to the right of number 1. Use a small stitch length as this will make pulling the paper off easier. 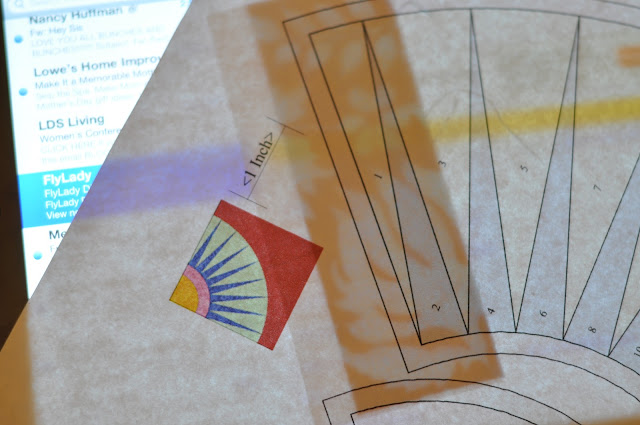 Then I flipped the fabrics open, trimmed the seam allowance to approximately 1/4" and pressed the seam.
Here you can see how it was flipped open as I added a strip of white to create the point. 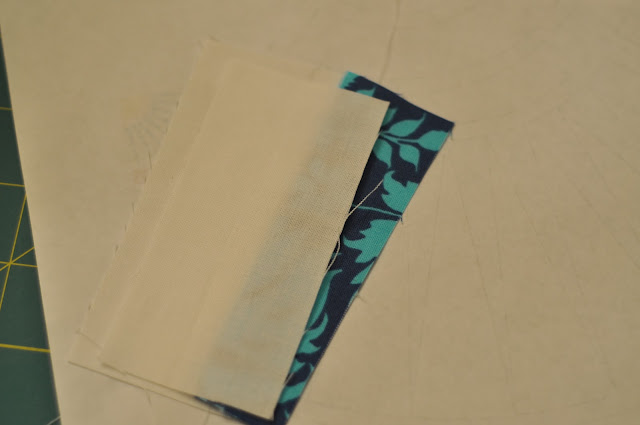 After stitching along line 2: 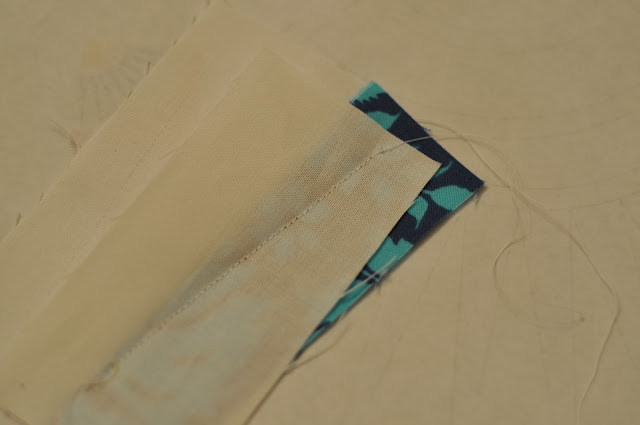 And opening and pressing it. 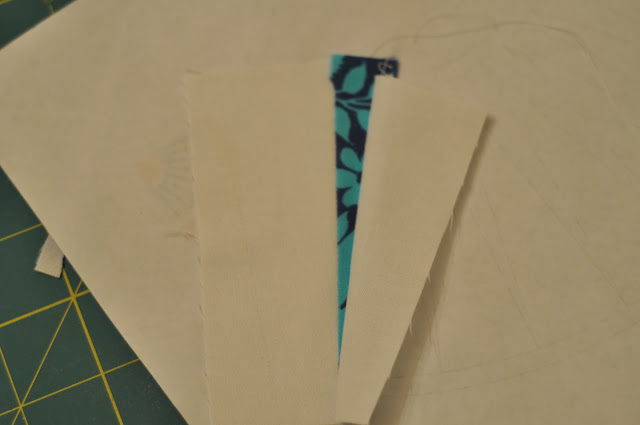 Here's what it looks like after I trimmed the seam allowance and pressed it open. And can you see how the shadow of the white doesn't fill in all of space 3?  Yep! Major goof! 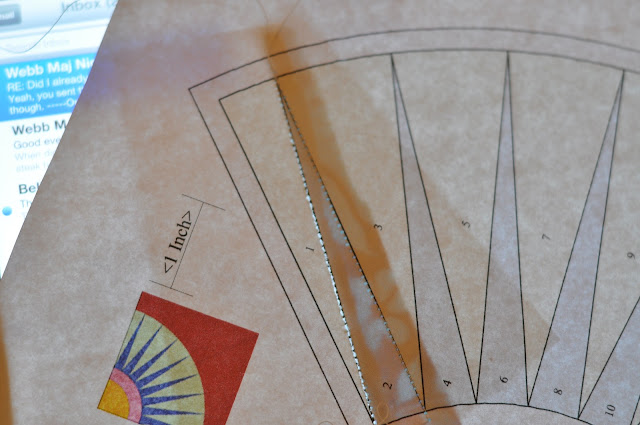 I had to take it out and redo it.  The piece of white was long enough I just didn't angle it properly. So as you alternate back and forth you have to angle your pieces parallel to the stitching line so that when you fold them open you have enough to fill in the space.  Like this. 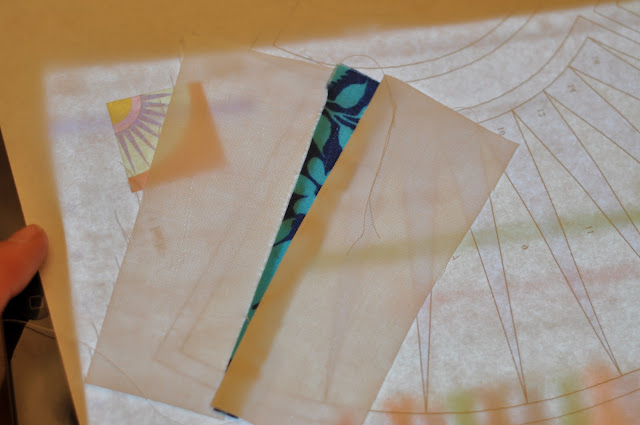 So then to finish the fan I kept adding blue then white then blue, in the manner above, 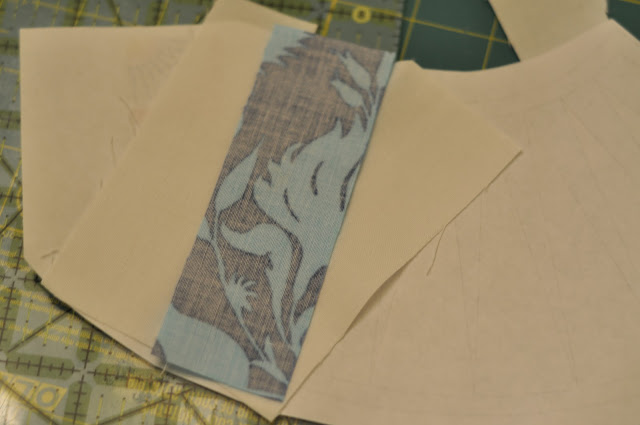 Until I reached the end of my template! 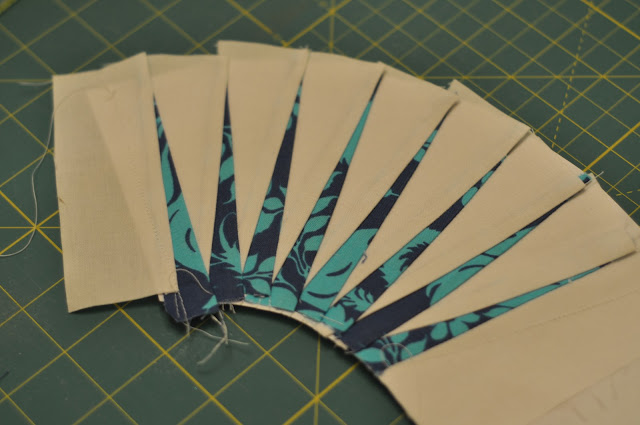 After the first 3 or 4 points, it really starts to make sense.  This is what your paper will look like when you are done stitching. 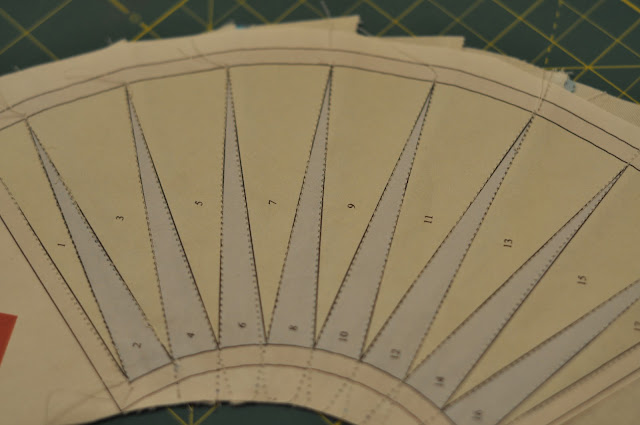 I didn't take a picture of this next step, but you can now trim on the outside line and pull the paper off.


Next, cut out the inner circle pieces. 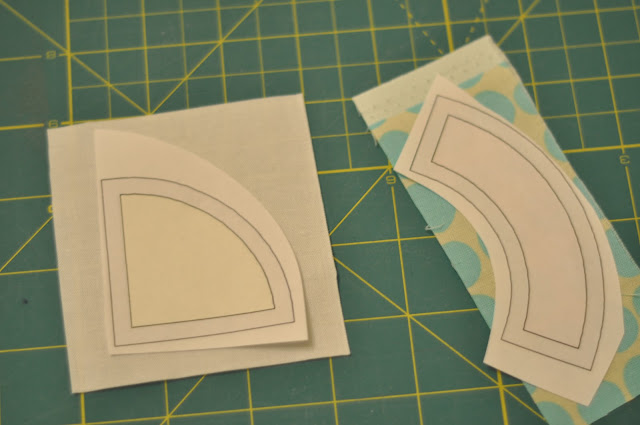 Fold them in half and press to find the midline. 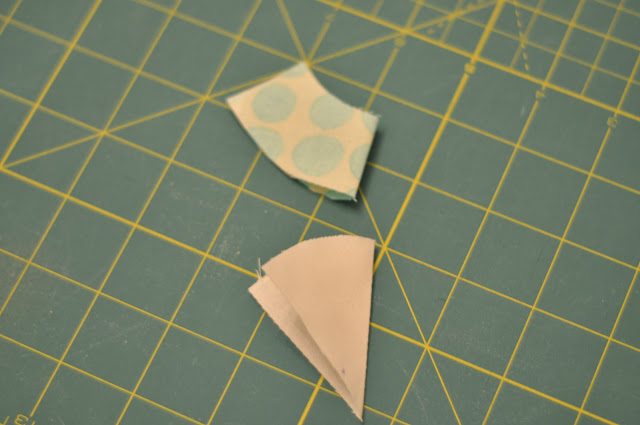 Pin the sections together starting in the middle and then on each end and then as much as you feel you need to keep the edges together.  This is what this side looks like: 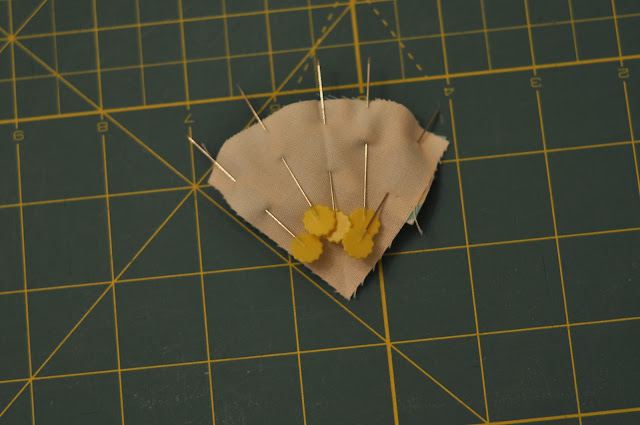 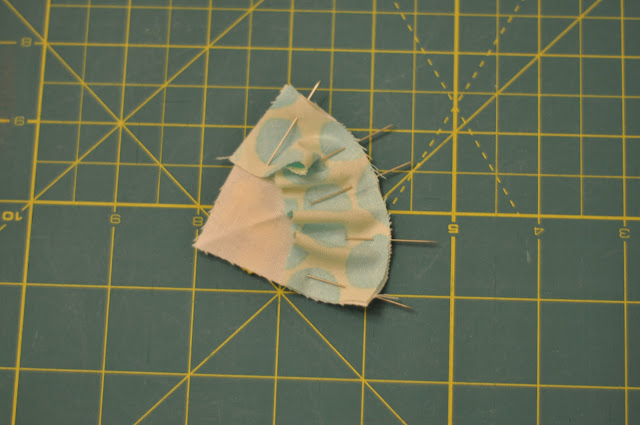 Sew with the smaller section (the corner piece) on the top.  Your pieces will cup like a bowl (sort of) as you sew a 1/4" seam. 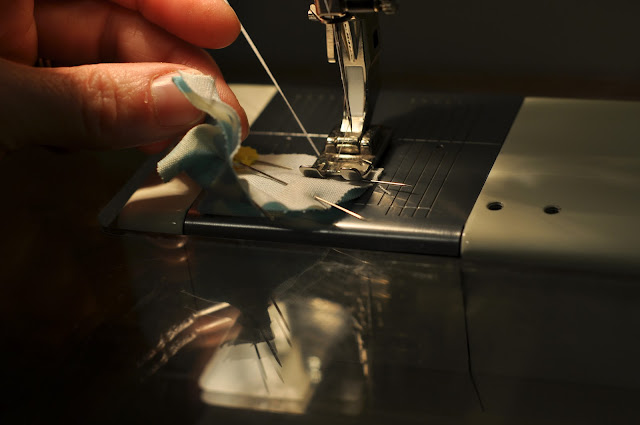 Clip the seam allowance (there is a picture below) and press.

Next, find the centers of each piece and start pinning together. Line up the edges next and just work to get the edges all lined up. 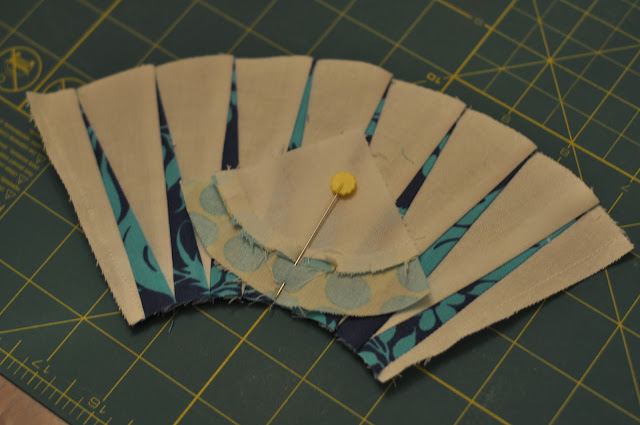 And then pin the dickens out of it!  See how it curves up?  That's the side you will sew on. 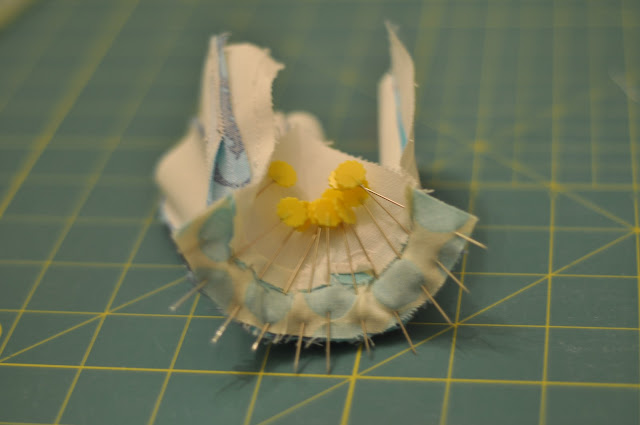 Next you will cut out the two pieces which you will sew to the top of the fan and complete the square.  I used one pattern piece and folded my fabric to cut two pieces at once. 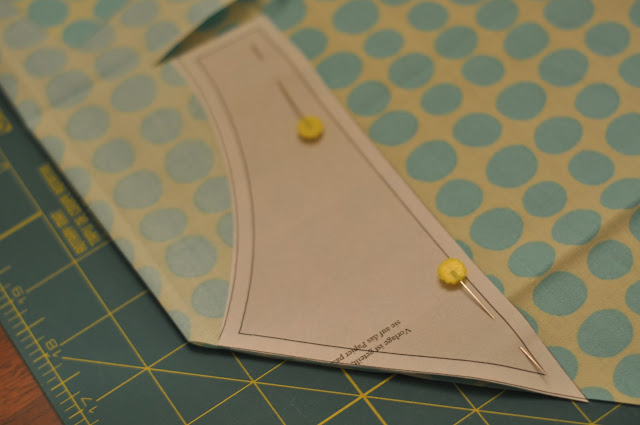 Sew these two pieces together at the fattest part to form the curve. Press.  (I press to the side, but you can do what works for you.) 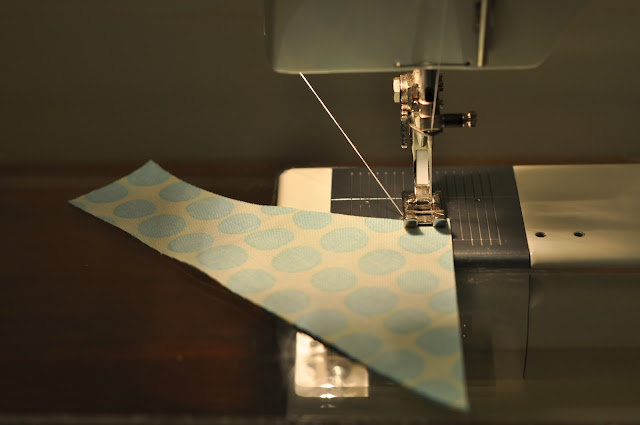 Next we will sew the last seam!

Again, find the middle of each section and pin.  The pin the edges together lining up the sides. 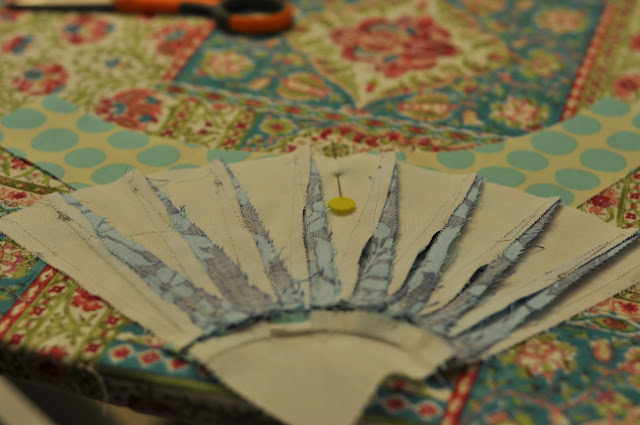 And then pin it some more.  The curve allows the fabric to stretch and have a little more movement with the bias.  This seam is actually easier because the pieces are bigger.  I like saving it for last! 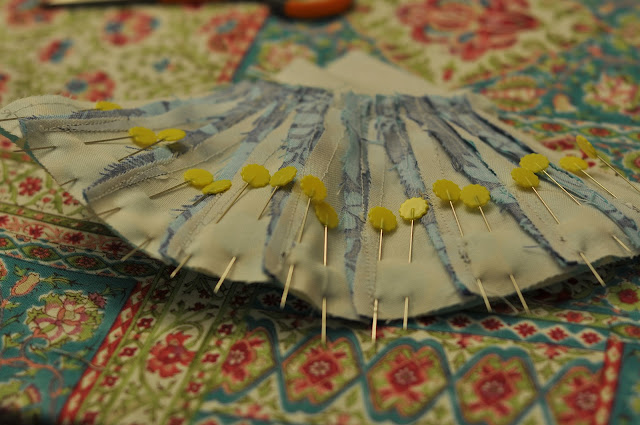 Sew a 1/4" seam with the fan piece on top and in the direction that will keep the seam allowances laying flat. 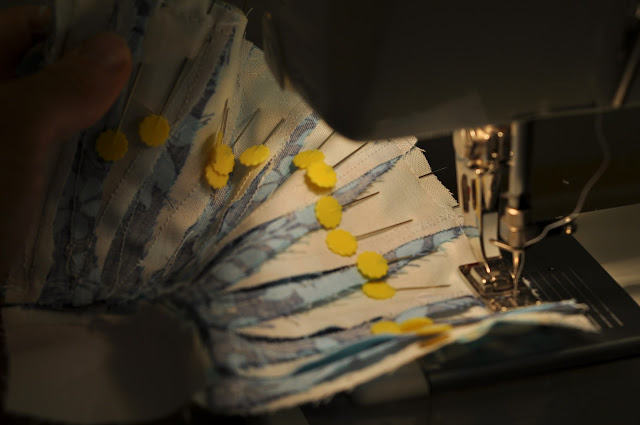 And if you don't have an overabundance of machine needles - you should probably take the pins out as you go.  Ignore the evidence to the contrary in my picture above!

And here is what a clipped seam allowance looks like!  It just helps the curve lay flat for pressing. So clip your seam allowance... 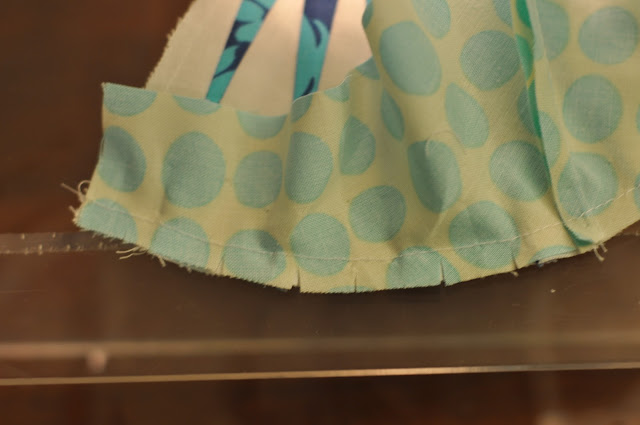 And then press it open! 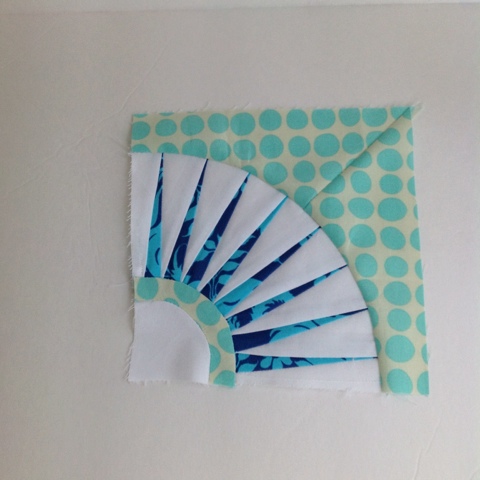 I really do love how this turned out!  The  sides look a little wonky because I haven't squared it up yet.  But that is something that you can totally do to make up for that.  I just love love love how crisp those skinny little points are!

Fabric is Amy Butler Lark (the dark blue) and Sunspots from LOVE (dots).

Maybe one day I really will have a quilt like my mom's!

Happy Sewing!!
Email ThisBlogThis!Share to TwitterShare to FacebookShare to Pinterest
Posted by Unknown at 12:21 PM

Thanks for the {not a tutorial}. The tip for using your iPad is great. I always struggle with holding up my paper to a window, to have it all shift before I lay it back down. Your teeny points came out perfectly!

This is looks incredibly fun! I can't wait to try.

Your block is fantastic!!

It looks great, well done! Although I'm not sure Apple will ever be advertising that as a selling point for their iPads ;o)

Those are some pretty perfect looking points there, Missy! Well done

Hi!
Great job on your first paper-piecing venture...to try curves on your first try is amazing!
When I first tried paper-piecing, I got so frustrated at how I couldn't figure out the backwards and size of the patches-problem. I searched and found Peggy Martin's "Quick-Strip Paper-Piecing" book. She has a New York Beauty in the book, and clear pictures and helps. This paper-piecing method is a must-have!!! I now really, really enjoy paper-piecing because of this book, and I share it with everyone! ABSOLUTELY no guessing with "how big do my patches need to be???" because you don't cut patches....just strips! And she tells you how to adapt her method to other patterns, which I use for all the paper-piecing I do! Peggy even offers her method as a Craftsy online course now !!!

That is a gorgeous block! I might be too intimidated to try it! you explain things so well, sooo maybe I wilL :) thanks!

great block - amazing what we can do under pressure :) oh, and I just got your bloggers choice fabrics this week - fabulous choices thanks so much :) I love millie's closet !

This is way beyond my skills right now, but I really enjoyed seeing how to do this and I have bookmarked it for future reference.