It's been one of those weeks. My husband was out of town and both kids decided to get REALLY sick. Which translated into me getting LITTLE sleep. So by Thursday I decided we weren't going ANYwhere the rest of the weekend. So even though I've managed (thus far) to not get sick - I declared some sick days. And settled into some projects. 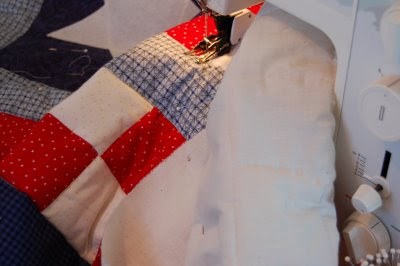 I'm not ready to show you the whole thing yet - but here's a little birthday gift for a friend of mine who shares her birthday with a major national holiday. The supremely embarrassing part of this gift isn't that it's totally holiday-themed, it's the fact that I started this so long ago I can't remember exactly when it was!!! I think it was 2000. (or 2001 - like I said I can't be sure). I started it in Utah, before I got married. It stayed there while I moved to D.C., got married, and then it found it's way to me at some point while we were in California. (This story is becoming reminiscent of this quilt's story.) I had some trouble with the star and that's the last I remember. It made the move with us to Virginia almost 3 years ago and I JUST pulled it out. I was tired of the space it was taking up. Plus, really, doesn't it just need to be finished?! 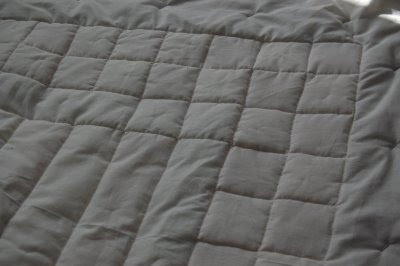 I was really excited when I pulled it out the other day to realize that yes, in fact, it was ready to be quilted!! I had forgotten that I used my mom's nice machine to fix the star and then she helped me get it laid out with the batting and backing. The only problem: I've never machine quilted. Well, that's not true. My mom and her sisters have a long-arm Gammil. I quickly found out that process is totally different than using a walking foot on a regular machine. I just quilted along the lines of the seams, I tried a little freehand in the border and decided I wasn't ready for that yet. I think I need a different foot. 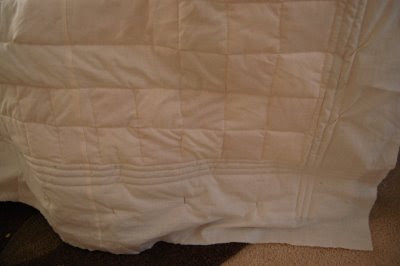 Let's just be clear - it's not perfect. And that's okay. I learned a lot of valuable lessons. Pin MORE!! Use flatter sturdier batting! Start in the middle!!! And maybe practice on a smaller project. I'm hoping once I have the binding on and it's washed it will just look like it has a lot of CHARACTER, not just a lot of mistakes.

********
I was so frustrated the other night with aforementioned project that I decided to work on my block for A Notion or Two, the virtual quilting bee of which I am a member. Amy asked us to do a wonky log cabin with a black embroidered or appliqued bird on the block. I thought it might be satisfying to work on something and finish it in one night. It was nice!

Sarah directed me to Tallgrass Prairie Studio where there is a great tutorial for wonky log cabins. It was a lot of fun. I only had to redo two strips - one because I sewed it on the wrong way (I'm sleep deprived) and the last one because my wonkiness was too extreme and I was having a hard time squaring up the block. I'm excited to try some more. I like the possibility of variation. 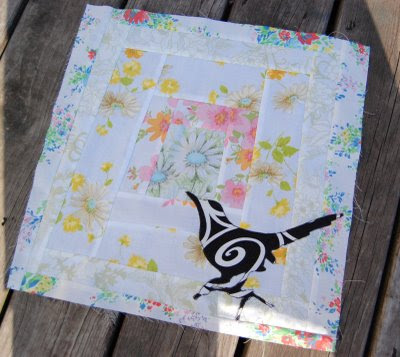 I googled bird sillouhettes and found all sorts of great images - but I really liked this one. It's a mockingbird, and I just love his stature! I have definitely have room for improvement, but it was really fun to do this. I like him so much I may just use the same pattern for when I do my block for my quilt. 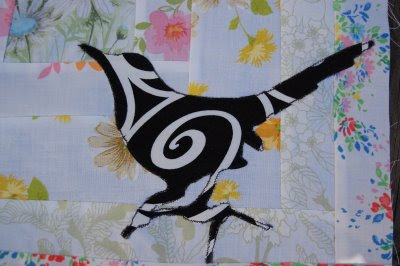 I know, I really should have mine done already since my month was January. But aren't you impressed that I got this block done before the middle of the month? I am! Maybe I really am a recovering procrastinator. oh wait, no I'm not. I just saw my bedroom. How many ways can you spell D-I-S-A-S-T-E-R?

But I'm just not ready to post pictures of that. I admire those of you who are.

Email ThisBlogThis!Share to TwitterShare to FacebookShare to Pinterest
Posted by Unknown at 9:31 AM

OMG! LOVE THAT! I really love birds so that is right up my alley - you are a creative genius - I really don't know how you get it all done!

I'm looking forward to seeing the pictures of the quilt finished. I'm sure once it's washed it'll crinkle right up and none of the 'mistakes' will show at all. They're part of the charm anyway. Right?

Hey Amy, I'm so proud of you for just getting it done!!! It feels good doesn't it? I love it when handmade is not perfect, it makes it so endearing. Hope your kids are doing better by now and I just have to say how fabulous your log-cabin birdie block came out! It's really fabulous. Are those vintage sheets you used? So pretty.

I am sorry your kids are sick -- of course it is while daddy is away! Quilt block is very cute!

amy, it turned out so awesome! the silhouette/fabric combo is perfect.

Love your newest bird block! How did your other quilt turn out? Hope you had a happy Valentines day.

Sorry you've had a bum week! That's no fun :( Your quilting projects look great! I always say - it's not about being perfect, but learning along the way :)

How do you have time for all these great projects?? U R amazing! :) I find my only time to get things done -- really done -- is during Aaron's naps and at night after he goes to bed. Apparently I could learn a thing or two from you ;) Love ya! Hope your children are feeling better!!