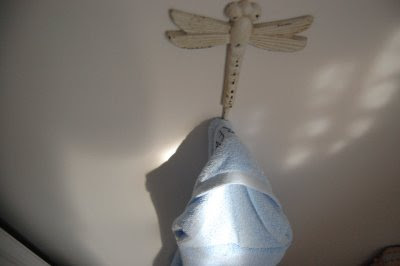 This little hooded towel was supposed to be made last year. Closer to his birth - not first BIRTHday. Oh well, I decided I was tired of the storage space this unfinished project was occupying, and I think he was tired of using the pink hooded towel with his sister's name on it. I whipped it up yesterday. And I forgot how really easy it is to do. It took only 5 minutes to pin and sew it together. I have made these before and just copied the ones that other's had made for me. I thought about doing a tutorial - but I googled it instead and found this one at Skip to My Lou. 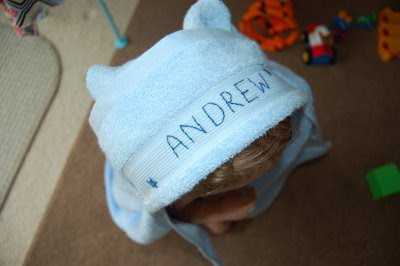 It's actually a different method than what I did - but still cute. I also like to embroider their names on them. I used a washcloth instead of a handtowel. Now that I can see the difference I would use a hand towel next time. It makes a bigger hood. I have to say, I love a baby wrapped in a hooded towel. Post-bath is designated snuggle time around here and if it gets threatened, we hear about it!

PS - I got the towels at Kohl's and I love how thick and soft they are. They are the Sonoma brand. And really, have you noticed that Kohl's is never NOT having a sale?
Email ThisBlogThis!Share to TwitterShare to FacebookShare to Pinterest
Posted by Unknown at 10:34 PM

filed in: baby, baby gifts, sewing for my kids

Very cute! I know about Kohl's. It would be plain idiotic to buy something there full price. Don't do it! You can wait.

Cuteness! I need a bigger towel for Owen about now - still love the hood but the baby towels barely cover :) I'm adding this to my never-ending list. . .