a duvet to dream under

Well, it's finally finished! sort of. It's on my bed at least and we slept under it last night. I haven't figured out the bottom where it will eventually have some sort of closure, but I was so excited to see it on my bed that I put it on late last night, right before we hopped in. 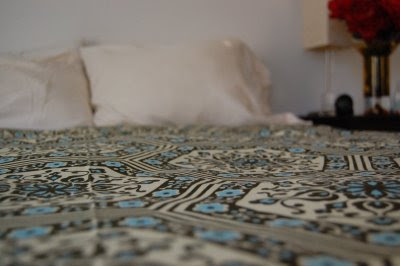 The top is from Amy Butler's Nigella home dec collection and I just used the flat sheet to our sheets for the back. We never use it, so it was perfect for the underside, so soft for sleeping under. We like the nordic way of sleeping under a duvet - no sheets (except on the mattress) just under the comforter. 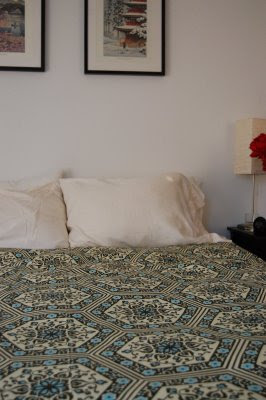 I coached my husband ahead of time that requisite Ooh-ing and Aah-ing was in order or he'd be sleeping on the couch. When he saw it he was genuinely excited. And then this morning I was admiring it from under it's warmth and he said, "yeah, this thing is Awesome! It's nice and warm." 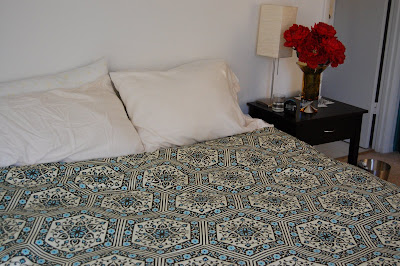 I do love the way it turned out - but I don't plan on making another duvet cover anytime soon. It took longer than I thought for several reasons: (if you aren't interested in minutiae, you can stop reading here.)
I'm sure there's more, but can't think of them right now. I'm so glad I did it! I learned a lot in the process and luckily did the hardest part while my mom was here last month and could hold my hand while I figured out the logistics of it all.

It definitely makes the room seem more put together. I plan on making some pillows and things to go on the bed - some of the blue and maybe some red thrown in too. I wish I could paint the walls. . . .

So I was a day late in finishing for the challenge. I called my mom to tell her and she reported that she just needs to sew on the borders for her quilt. So I guess working out was easier to accomplish last week than our sewing projects - hmmmm. that's weird.
Email ThisBlogThis!Share to TwitterShare to FacebookShare to Pinterest
Posted by Unknown at 8:00 AM

awesome! i love it! you are amazing girl!

Amy, I can only dream about being like you someday. You are truly awesome! I am trying to knit a scarf. We learned how in YW this week and I am slowly getting the hang of it. Aaron finds it amusing to watch me knit--it is NOT a relaxing project for me!

So do you always have fresh flowers by the side of your bed, or did you just put them there for the photo op? :)

So what do you sleep under in the summer when it's hot and your sheet is sewn to the underbelly of your duvet?

Good questions Cara - we have a cotton blanket that is easily washable and we sleep under that in the summer. But really - I like to sleep under the duvet all year. If you stick your feet out from the bottom you don't get to hot - that's the beauty of down.

And yeah, those aren't fresh - and they are usually on the dresser. But I needed a little bit more color since my walls are so boring. Thanks for calling me out! hahaha

it is soooo awesome!

I used Amy butler fabric to make my duvet cover too:

IT is a lot of work to match, so I just used a different fabric along the sides. Plus, it was cheaper that way :)

Ooo, I love it Amy! It looks beautiful. Absolutely love the colors:) So you! You did a nice job!

a triumph, my dear. it is beautiful and good thinking on the coaching of the husband.

nice duvet Amy! You did a great job, all those little details really paid off!

i missed this post - i love it! Good job!

Looove this! I love Amy Butler's fabrics and this turned out great. Thanks for sharing.