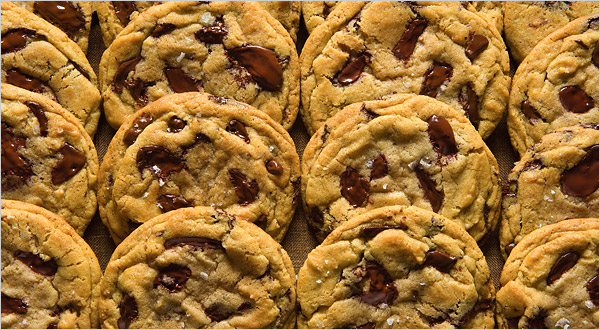 Francesco Tonelli for The New York Times
SUGAR AND THE SEA A sprinkling of sea salt just before baking adds a distinctive dimension to chocolate chip cookies.

Have you heard about this recipe? I've been hearing rumblings about it for several weeks. I have yet to try it, but that picture above from the article makes me salivate just looking at it! I love chocolate chip cookies. I mean really, who doesn't?? The unfortunate thing is that for the past 4 months I have had to cut out all dairy and chocolate for the sake of my nursing boy. He doesn't like it and I don't like cleaning up all the spit up. I wish I didn't see a direct correlation between my intake of milk and his spitting up problem or I would indulge a little more often. Anyway, I haven't had many treats and I'm dying to try these. So if any of you have made them or do make them - let me know what you think. I'm thoroughly intrigued by the idea of sprinkling salt on the dough just before baking. Mmmmmm.

The article is a good read - it reminds me of a lot of the Cook's Illustrated articles - explaining a lot of the science and how the recipe evolved.

In a related story, one of my new favorite cooking blogs, Cakespy, just did a piece on how they made the anti-perfect cookie. It's hilarious! Check out that post here.

And in a sort of related way - there is one, no, two things that I have been able to eat without terrible consequences: Rice Krispie Treats (made with that olive oil butter spread - Smart Balance) and the Pillsbury Funfetti Cake Mix!

I've always loved Rice Krispie Treats, but I've had a love/hate relationship with cake. I haven't always been a fan of boxed cakes or grocery store bakery cakes. I like rich heavy pound-type cakes, preferably in lemon, usually homemade, from scratch. But my friend Carla (who does some fun crafty things) introduced me to this cake a few months ago. I ate with reckless abandon (it has milk whey in the ingredients list) and it didn't seem to affect him. AND I LOVE IT! I don't know what it is about it, the flavor, the moistness, the frosting (rainbow chip, I think) - it's just good. So good that I've eaten for breakfast every morning since Friday when part of a cake was left at my house. I've never actually made one myself. I'll consider Carla the expert on that.
Maybe she'll comment and remind me what kind of frosting she used. (hint, hint)

After google-ing Funfetti cake, I've found that I am not alone in my love. I should have taken a picture of her cake, because it looked much better than most of the homefrosted versions (although there was a really pretty pink fondant covered one). But I ate it too quickly and most of it by myself. I would have been embarrassed to show you just HOW much I ate. I blame you, Carla. and Cathy for moving.

Funfetti cake lovers of the universe, UNITE!
Email ThisBlogThis!Share to TwitterShare to FacebookShare to Pinterest
Posted by Unknown at 4:54 PM

cake? did someone say cake? I LOVE cake!

Ok,totally LOVE fun-fetti cake! And yes it is Rainbow Chip frosting. Which by the way is really hard to find, so I stock up whenever I find it. Cake is wonderful and that cake well, takes the cake.

aww, thank you for the shout out!

How funny that you knew I was LDS too! Glad you liked the cake. I think Funfetti is my absolute favorite. Your blog is really cute. I'm always happy to find a new and good one to read!

that picture made me salivate before i even started reading anything. i need to go make a cookie now. thanks for the inspiration. not that i needed any help. i have been craving them for some time, now.

I have loved this cake for the longest time and Michael Anne really loves how "fancy" it is with all of its wonderful colors, especially when she gets to put the rainbow sprinkles on top!
Another cake that I made recently and am totally addicted to now is a lemon-poppyseed cake from my cousin's wife's blog www.cafeamy.blogspot.com you should try it out. It is the best, light tasting, summer goodness I've had in a long time and I'm temped to make one every week, hey it is so good maybe twice a week!!! If you try it tell me what you think, I absolutely love it! If you make a trip out here this summer I'll make one for you...or this winter, or really anytime...it is that good!!!!!!!!
Miss you. :) Julie

I'm making these cookies tomorrow. I can't wait and I'll make sure to report back. I have a feeling I'll love them, I always use salted butter in ANYTHING I make because I love a higher salt and sweet combo.

I have to admit I've never tried Funfetti cake... I feel a bit empty inside.