We moved from San Diego to Quantico, Virginia in July. Instead of making a straight shot trip out here we decided to take the scenic route! We drove through the mountains of California into Oregon and stayed in Grants Pass with Nick's grandparents and then Roseburg with friends, Mike and Jenny. From there we went to Sequim, Washington to stay with my brother Brian, Megan and kiddies. What a blast! Then we went back to Oregon (Milton-Freewater) to visit Nick's grandma, down to Salt Lake to see my parents, and a night in Denver with a long-time friend before trekking the long 2 days to Virginia.

We visited a couple of National Parks on our way.

This was at the Hurricane Ridge Visitor's Center of Olympic National Park in Washington. A group of British folks were so enamored with Alison that they took this picture of us on our camera as well as some with theirs. Someone on the trail called her Heidi - hiking up in the mountains like this with that hat. It was funny. 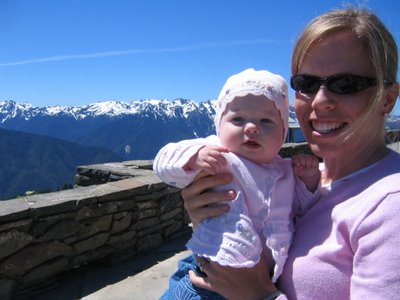 This park is one of our favorite places on the planet. There were deer happily grazing, bursting wildflowers, billowing clouds, and spectacular vistas. It is so naturally pristine. It makes you wonder what the earth looked like before we took over. The park is enormous and we only touched a few places on it. There are also beaches, Crescent Lake and waterfalls. Here's their link: Olympic National Park 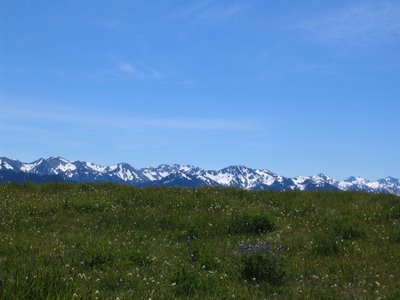 This was July 4 at Crater Lake in Oregon. There was snow all over the place! (Nick, Mike and Alison) 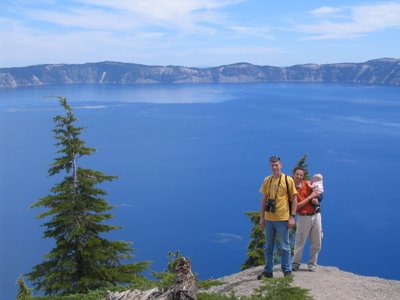 This lake is amazing! The water is carribean clear and blue, but FREEZING. It sole source of water is precipitation and snow melt. It was formed when a volcano caved in and formed this large crater. It's deepest point was measured at 1,932 feet and the diameter is more than five miles. The cliffs surrounding the lake rise up to 2000 feet above the lake's surface. The area's winter brings some of the heaviest snowfall in the country, averaging 533 inches per year (this explains the lingering snow). Here is a link to the Park Services information about Crater Lake: http://www.nps.gov/crla/

These are some of the pictures we thought we lost when our camera went missing. It's amazing how on the road and with a baby you have so many things to keep track of, even the most together person (not claiming to be one) starts to forget! I like to call it mommy brain. I kept calling the Visitor's Center and lucky for us someone finally found it and turned it in the day we were leaving. We were so relieved. We were more worried about losing the pictures with Nick's grandparents than anything.
Email ThisBlogThis!Share to TwitterShare to FacebookShare to Pinterest
Posted by Unknown at 9:32 PM